The Story of Fynn (as I know it)

Fynn was in his puppy years. He lived off the chilly, rocky coast of Ireland, by his owner, nicknamed, "Captain," who worked at the lighthouse and on several fishing boats in the harbor. He had several brothers and sisters, but they were given away at the local farmers market (as pets, of course). I'm not quite sure what Captain found so appealing about him, but Fynn was the only pup he wanted to keep.

Captain was silly and dressed him up in rain gear: yes, boots and everything. He had an odd sense of humor that he would soon rub off onto Fynn.

The new neighbor lady, Suzie, saw him one day through her window all dressed in his rain gear and squee'd, running up to pet him. The magic started there. Man, you should have seen the look in Captains eyes when he saw her. Fireworks, and you can bet Fynn saw them as well.

Captain and Suzie had an adorably awkward conversation- primarily because Captain was so darn nervous- all he could think to do was recommend her a great recipe ebook he recently found online. Fynn hid behind his paws in embarrassment.

Fynn had a mission; he was get the two of them together, if it was the last thing he would do. His first and simplest plan was to escape his home and run to hers, which would cause Captain to have to run after him, giving him a chance to redeem himself.

And so Fynn ran. He ran out of his rainboots, as fast as he could, towards Suzie's frontyard. As he was running, he could sense Captain behind him, and barked loudly. As soon as he reached Suzie's house, he immediately jumped up on the door, rang the doorbell, and started barking some more.

As soon as Suzie finally opened the door, Captain was running up her front lawn. They both looked at eachother with a blank and humourous stare, for it was quite strange that Fynn had rang her doorbell, and was now laying patiently was Suzie's feet.

"Some dog you have here," she said to Captain.

And this time, the Captain was smooth, perhaps he just needed warmed up. The fireworks went off in his eyes once again, and this time, Fynn looked up to see fireworks going off simultaneously in hers.

The rest is history: the story of how Fynn saved the day and lit the match for a beautiful love affair to spark into being. 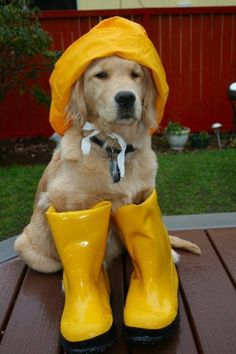